A Behemoth spouting flame and snapping its gargantuan jaws is running toward you. There are just moments to decide what you’ll do. Drawing from your experiences, you dodge sideways while lashing out, unleash an elemental blast as you get to your feet, and then weave your way into a combo that allows you to dodge an impending tail swipe. Following your instincts pays off, and you press the assault.

You’ll make countless choices over your time in Dauntless and our goal is to make each of them meaningful and rewarding. Expanding variety and depth in combat is important to the future of Dauntless, as we recently laid out in the Dauntless Development Roadmap. In this article we’ll talk about the ongoing process of making combat more fluid and how we’re building upon mechanics to offer interesting, tactical choices.

Combat is most rewarding when it allows for fluid, instinctive reactions to the challenges at hand. Mastery develops when players are able to visualize their goal and then work toward reliably and effectively executing. Combat options that create fluidity, in turn, promote variety and mastery. To promote these qualities, we will be further expanding the tools that are available to Slayers with new movement-oriented attacks for every weapon.

Savvy sword slinging Slayers will notice that we introduced a dodge attack with patch 0.2.4. This new option means that players coming out of dodging no longer need to reset to “neutral” before going into an attack — they can use the dodge attack to begin their combo. This is the first of several movement-oriented attacks that we will be introducing across every weapon.

Players can also look forward to smoother transitions between sheathing and combat. As with dodge attacks, our goal is to promote more fluid combat that reacts to players’ instincts. Nothing should slow you down once you’ve decided to engage with a Behemoth. Slayers will be able to smoothly go from being sheathed and into an attack or combo so that they don’t get caught flat footed. Unsheathing your weapon is about getting into combat smoothly and making a fluid transition from exploration to combat, and you can look forward to these changes in upcoming patches.

We’re excited to continue making each weapon rewarding and intuitive to use. Each weapon will be receiving its dodge attack which complement its strengths (building charge-level for axes, getting off a quick cannon snap-shot for hammer, etc.) in upcoming patches. We know that these moves will help to add diversity to playstyles and reward a Slayer’s best instincts.

Every Slayer is trained and capable of using the arsenal of weapons available in Ramsgate. And while every Slayer may have their favorite weapon, none of them would deny branching out from time to time for the sake of variety or necessity. Our goal is to ensure that no two hunts are the same, and that means Slayers will need to adapt accordingly if they’re going to survive.

Dauntless’s weapons already have the groundwork for distinct personalities and playstyles. While we still have work to do, we’ve been happy to see healthy debate and discussion around each weapon; what’s most powerful, what needs improvement, and each player’s personal favorite. 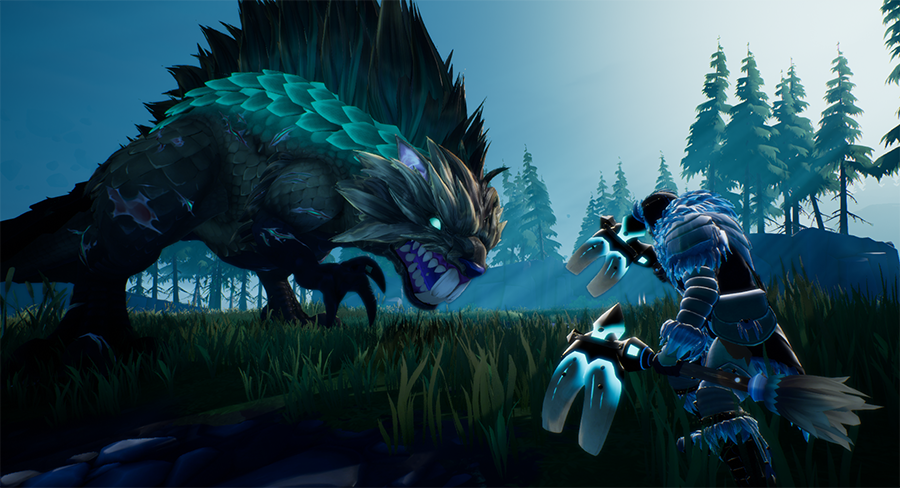 We’re ready to build upon that groundwork and revisit each of the weapons, focusing in on what makes it special and how to reward mastery. This means expanding the available list of moves, branching out with combos, and evolving special attacks. In general, we’ll pursue these improvements one weapon at a time and you’ll see them roll out incrementally over multiple patches.

Outside of individual weapons, we’re also excited to explore and improve team dynamics by way of damage types. Different weapon types do different types of damage. Swords cut, hammers dole out blunt damage, and future weapons will do piercing damage. While these changes don’t make much of a difference in Dauntless just yet, damage types will soon play a much larger role in your tactical and strategic choices.

Certain Behemoth parts will be more or less vulnerable to different kinds of damage (cutting tails, crushing bones, etc.) so Slayers looking to harvest parts for crafting may want to change their loadout accordingly. Piercing damage will open up opportunities for additional damage by creating vulnerable points on Behemoths, incentivizing Slayers to coordinate their attacks. And while blunt damage may not be the best for bringing back tails or toes, there’s nothing better suited for stunning or staggering your quarry. While each weapon type will be inherently geared toward a damage type, we’re also experimenting with the ability to tweak damage types, allowing you to build multiple weapons to suit different opportunities.

Damage-type composition will become increasingly relevant for hunting parties that are looking to get ahead. Whether you’re on the prowl for specific ingredients, trying to tackle a challenge, or pushing your friends to their limits, team composition is going to be an increasingly important consideration.

Any opportunity for players to make impactful and viable decisions means opportunities for mastery, creativity, and new collaborative competition. We can’t wait to see what you’ll come up with!

Continual improvements to weapons and combat are a core part of the Dauntless experience. We’re excited to explore the features detailed in this blog, continue to improve existing weapons, expand combo breadth, create new opportunities with aerial combat, and reveal two more weapons (one of which will have ranged capabilities).

In the near future we’ll also be giving the hammer more direct attention. This means making ammo a more interesting and dynamic component of the weapon and expanding its kit to really lean into what makes hammer hefting Slayers tick; smashing, blasting, and staying on the move.

Through Closed Alpha and the current state of Closed Beta, combat has been in a boiled down, “back to the basics” state. We’re excited to move forward from brute-force hack-n-slash toward more strategic combat systems. Your feedback is instrumental to the improvements that we are making. This firm foundation has allowed us to evaluate countless hours of player data and thousands of comments. Please keep it coming as we introduce more frequent additions and alterations to combat going forward.

As always, thank you for playing. We’ll see you in the Shattered Isles!