The captain of The Anne-Callyn flew lower, tighter circles than was probably responsible. The dangerous nature of their work meant most Slayers didn’t live long, and the sheer devastation that a Behemoth could inflict against a body pushed the rest to an aching, arthritic retirement. It was a true privilege, not wasted on him, when four of Ramsgate’s most grizzled and experienced Slayers chartered his services. He’d be damned if he was going to miss a moment of the hunt to come.

His crew watched, riveted to the rails and glass of the observation deck as the battle unfolded. The masters of the hunt moved with an almost casual elegance that belied lethal precision and coordination. Kinyara cast out her Chain Blades as the Embermane charged forward, tripping the Behemoth and sending it sprawling to the ground. The tip of a War Pike pierced its hide even before its body had come to rest, breaching its defenses and spraying gouts of aether. The beast was only just finding purchase as the booming crack of the Impact Hammer sounded and several tons of screaming force slammed into it. Then it was tumbling, reeling, its claws desperately scraping for footing. The Slayer with the sword was upon it, capitalizing on the gashes torn by the War Pike’s blade and severing the tail of the creature with shrewd, grim efficiency. The Behemoth screamed, clawing at its assailant, and driving the Slayer back to a safe distance.

There were no easy hunts in the Shattered Isles. To those who let experience teach them, there was wisdom. And with that wisdom came the most beautiful, deadly dance they had ever seen.

We’ve made skill a cornerstone of the Dauntless experience, looking for ways to push Slayer skills and creating compelling choices for players. December’s Sharpen Your Skills update will include several improvements to combat as well as a brand new weapon to master.

There are few things that feel better than mastering a weapon and going into a “flow” state with your team. We’re adding more ways to reward your individual and team skills, and we can’t wait to see what you’ll accomplish.

We’re excited to announce that we will be expanding your arsenal and exploring ranged combat by adding Dauntless’ fifth weapon, the War Pike. This is a whole new weapon with unique attacks and an explosive ranged blast.

The War Pike is a precise weapon that rewards a surgical approach and tactical mastery. The War Pike’s primary attack is the forward thrust. This attack can be repeated several times to deliver precise damage with the War Pike’s razor-sharp tip. You can press left or right during thrusting attacks to strafe sideways, moving in tandem with your quarry without letting up on the pressure. For Slayers that can anticipate a Behemoth’s attack pattern, this means an unrelenting assault. The War Pike’s second attack deals slashing damage in an area as your Slayer spins it. This is the perfect way to spread damage out across a Behemoth, or to use as a point to pivot from as you push the attack.

Combos flow naturally from this new polearm. Instead of memorizing specific combo inputs, Slayers can string together primary and secondary attacks as they see fit. Combo chains are completed with powerful finishing moves once either four primary attacks or two secondary attacks have been used in a single combo — whichever comes first. This gives you the flexibility to adapt your attacks on the fly without committing to a heavy finishing move until you’re certain the time is right. 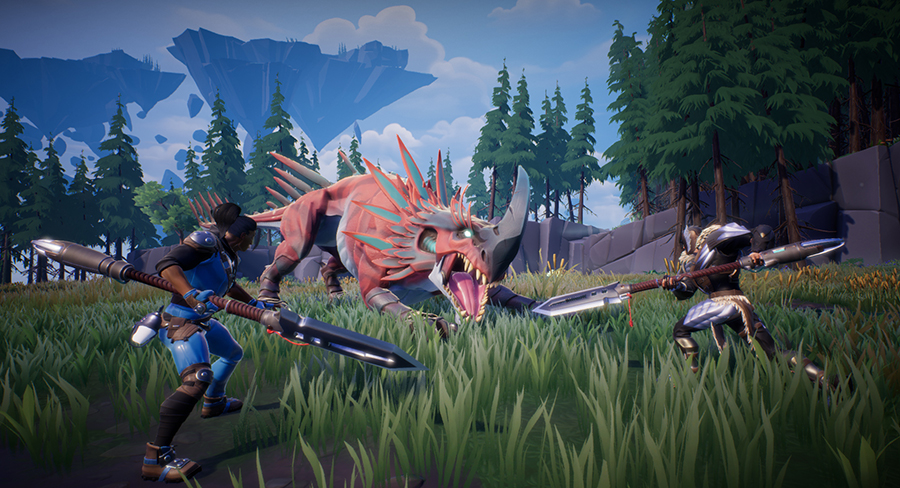 Your War Pike will gather power with every strike that you land. Your weapon will capture this power and your special meter will slowly fill. The more full your meter is, the more damage you will do. Slayers looking to maximize their damage will need to walk the line between aggression and caution; the meter will slowly drain if attacks aren’t being landed, and it will totally empty if you take damage yourself. But what makes the War Pike truly shine is what you do when you choose to convert that extra power.

A Slayer’s War Pike is no mere polearm. Built into the weapon is a powerful cannon that fires aether projectiles with deadly force. Players can choose to press the special attack button to store the power they’ve accrued with their attacks and convert it into ammunition. The power in each shell created is determined by how full the special meter was when the power was converted. When you’re ready to let loose, hold down the special attack key to spin your War Pike around and ready your strike. Get your target in your sights and release the special attack key to unleash a devastating blow at range. 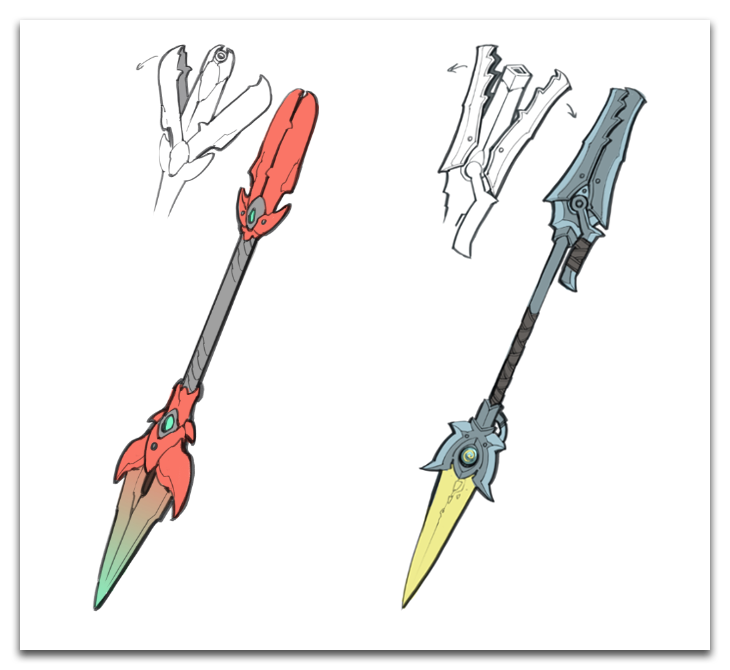 The War Pike is our first foray into ranged combat and perfectly complements your existing arsenal by providing a weapon with a focus on accuracy and surgical strikes. It’s also the first weapon to feature piercing damage as Sharpen Your Skills also introduces a new system that will better reward coordinated combat.

Damage types are coming in Sharpen Your Skills, bringing with them enhancements to the weapons you know and love, and creating opportunities for truly memorable moments of collaboration. Each weapon will now have a default damage type which will change the way that it interacts with Behemoths and Behemoth parts.

Blunt damage, mainly the domain of hammers, is your best bet for staggering Behemoths and breaking bones and armour. The newly introduced War Pike deals piercing damage, inflicting wounds on Behemoths that your fellow Slayers can attack for additional damage. Slashing damage, dealt by the blades of swords, axes, and Chain Blades, is effective at severing tails and other parts. 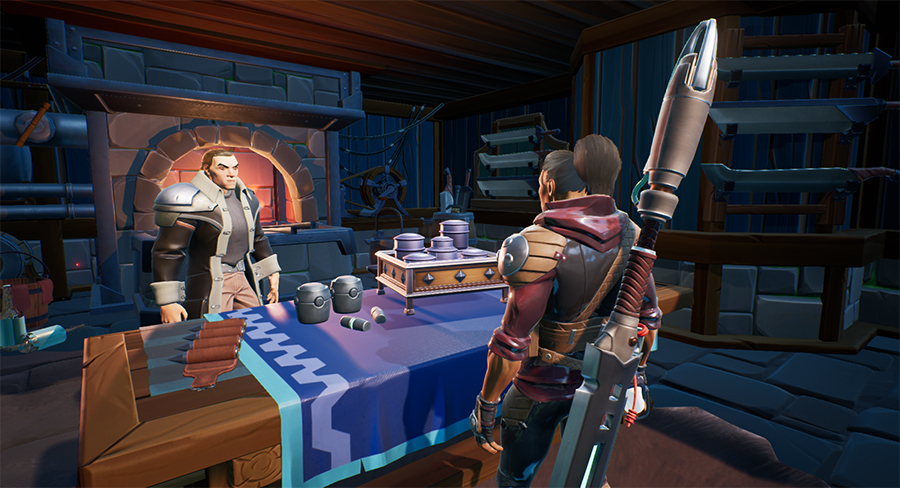 Physical damage types reward coordination and communication by creating opportunities for Slayers to capitalize on openings in a Behemoth’s defenses. Move in on staggered beasts with impunity, remove deadly threats like lashing tails, or rally your team to inflict devastating damage to exposed weaknesses.

Slayers playing together, working with a guild, or trying to secure specific part drops will want to factor damage types into their considerations. We’re excited for how this improvement will promote communication, and also reward Slayers who branch out to explore different weapons.

You’ll spend more time swinging your weapon than anything else as you forge your legend in the Shattered Isles. It’s critical that every time you hit a Behemoth it feels powerful and rewarding. We’ve invested heavily in improvements to hit effects, weapon feel, and audio — all of which add up to making combat feel great.

With Sharpen Your Skills, we’re introducing optional damage numbers. These numbers are on by default, but can be disabled if you prefer. This is a small but significant option that will further enhance the feeling that you’re making a difference with every attack. You’ll also be able to see which types of damage you’re doing so that you can see what’s effective. It’s a great way to get a sense of your power, and we’re happy to implement a feature that our community has been requesting.

The all-new War Pike, the depth of damage types, and the satisfaction of seeing your damage numbers — it all adds up to big improvements to combat in Sharpen Your Skills. Dauntless is a living, breathing world, and we’re always working to improve what it means to be a Slayer. Your feedback is an integral part of this process and we can’t wait to hear what you think of these additions.

Thank you for joining us on this journey. We’ll see you in our next update when we reveal two new Behemoths.