The long-awaited “cell vendor” is finally coming to Dauntless! This week, we’ll be introducing a brand-new NPC – the Middleman – who will let you purchase and combine cells. Two new, related currencies are coming as well: aetherdust and ace chips.

The first of the two new currencies, aetherdust, can be acquired by breaking down unwanted cells in your inventory. Simply open up your bag, select the cell you want to target, and hit the Salvage button.

Once you’ve got some aetherdust in hand, take it to the Middleman. He offers three new cells for sale every week – one epic (+3) cell and two rare (+2) cells. Use your newly-acquired aetherdust (or platinum) to make a purchase. Don’t worry too much about cleaning out his shop, but do act quickly if you see a must-have cell. The Middleman’s weekly stock rotation means that old cells get replaced when new ones arrive. 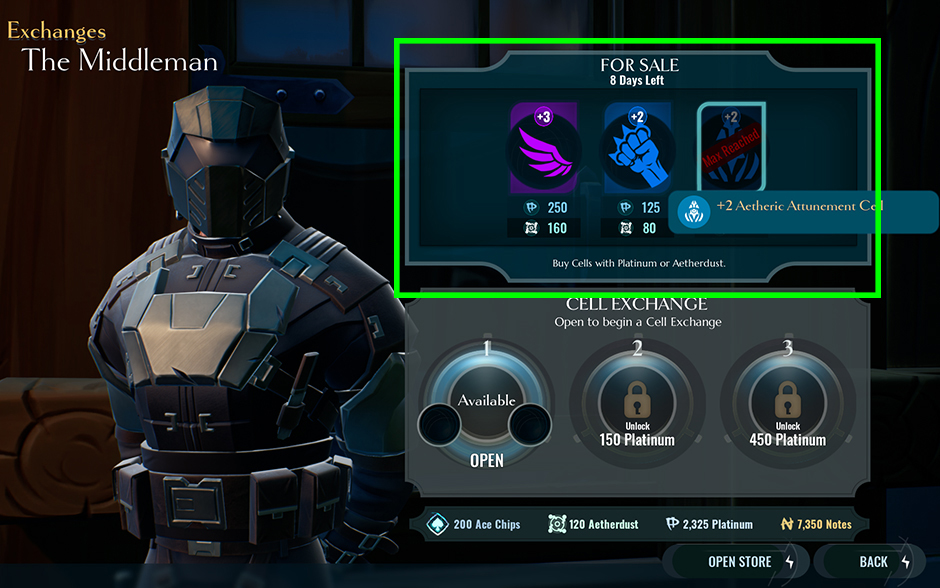 The Middleman is more than just a “vendor” of cells – he’s also versed in the arts of cell fusion. Hand him two cells and give him some time, and he’ll combine them into something even better. 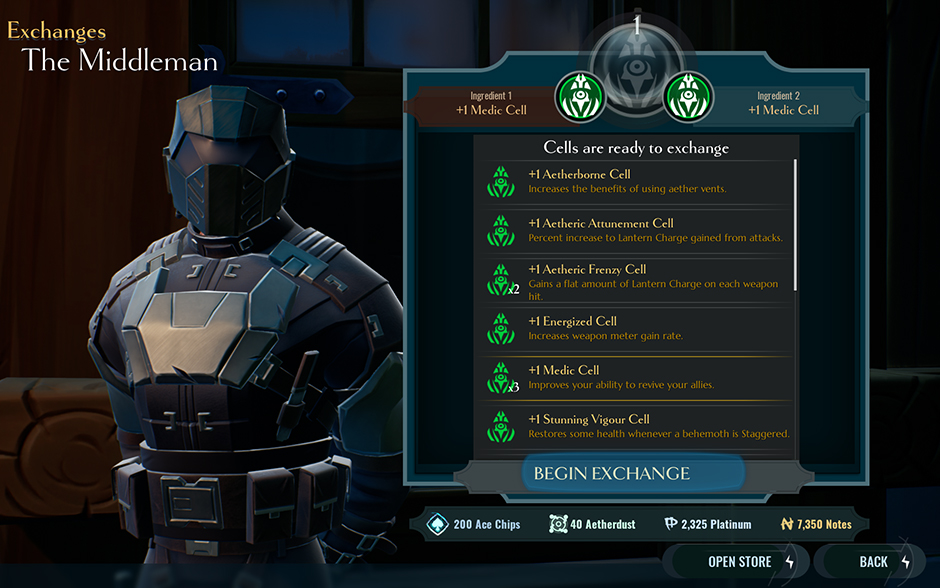 +1 cells aren’t the only ones you can fuse. Putting two +2 cells into the mix will spit out a +3 cell. Just don’t try combining a +1 cell with a +2 cell; the Middleman won’t explain why, but he says it would break his “proprietary cell conversion process.”

What about +3 cells that you don’t really need? If you don’t want to turn them into aetherdust, take them – and your notes – to the Middleman. For a fee, he’ll turn your +3 cell into another, random +3 cell. Maybe you’ll get lucky and score that +3 cell you really want. 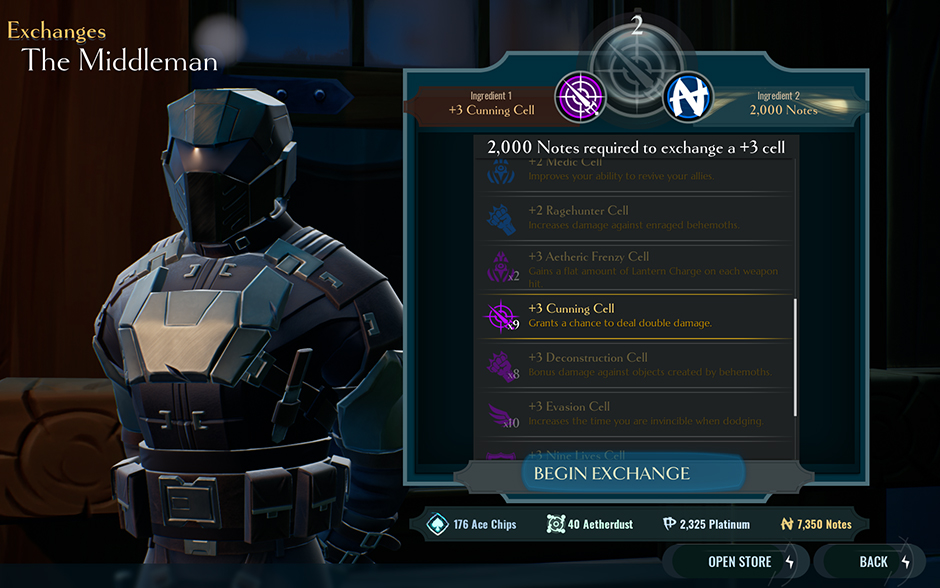 Combining cells via the Middleman is free, but it isn’t instantaneous. It takes our shadowy salesman about 24 hours to fuse two +1 cells. Combining rarer cells takes even longer. Of course, you can always speed things up with some aether concentrated extract modules. These “ace chips” – available in the in-game store – reduce the amount of time it takes for the Middleman to do his thing. 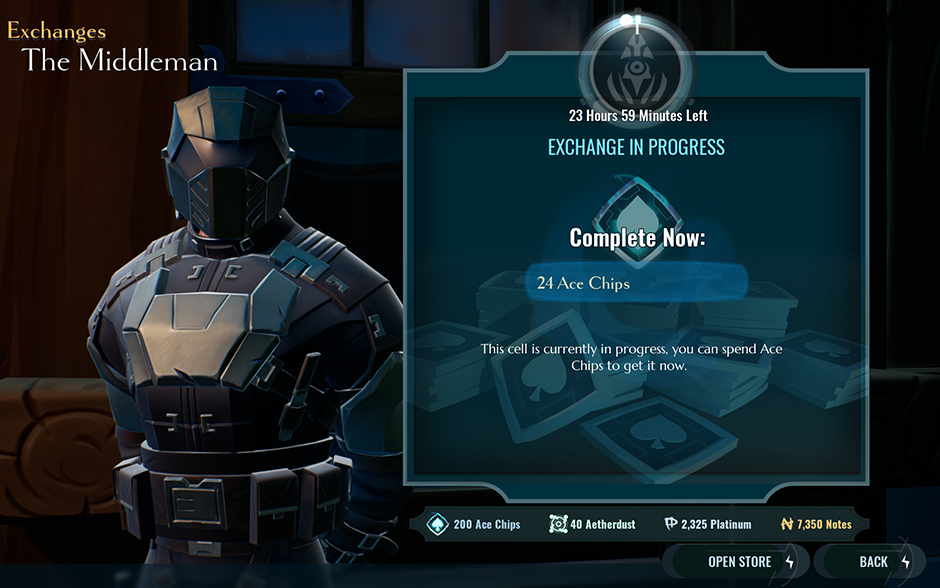 You can also get things cooking by opening up two more fusion slots. 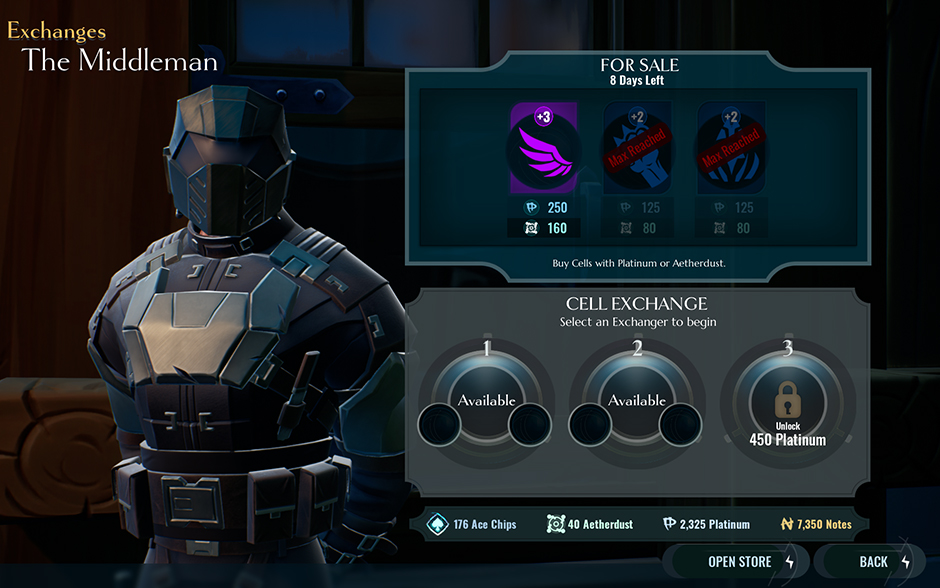 Each additional slot requires a one-time fee to unlock, but once you pay the platinum it’s yours to use. With three cells cooking at once, you’ll be on your way to your dream build in no time.

MEET ME AT THE MIDDLEMAN

While any Slayer can use the Middleman’s services, only those who have reached the Yonder Keys will be able to pick up the “Man in the Middle” quest. Swing by the bosun and look for the golden exclamation point next time you’re in Ramsgate.

Questions? Comments? Hit up the official Dauntless forums at forums.playdauntless.com. See you in game!