Heng strode out of the docks of Ramsgate and straight toward Gregario Flynt. She placed her sword, its long, cruel blade nicked and burnished from heavy use, on his workbench.

“Well, hello, Heng! Wonderful to see you. How have things been for you on the frontier?” beamed the stylist. “Enjoying this lovely weather we’ve been having?”

The Slayer reached into her bag and produced a glowing stone, roughly bigger than an apple, which she placed in his hands without a word. Its surface swirled and glowed with an eerie aetheric light.

“I’m great, too. Thanks for asking,” Gregario flatly said.

“This took a lot of time. Don’t have time for chitchat. Still more to do,” said Heng as she retrieved a cloth-wrapped item from her things. “Will this work?”

Gregario folded back the cloth and gave a quick start, finding himself confronted by three large, bright, purple eyes with umbral pupils. They were swirling and spinning in the black, shadowy sword they were a part of, focusing in feverish, disconcerting disarray.

“Told you. Been busy. Can you do it?” Heng insisted.

“Good. Make it quick,” she said, a grin creeping across her face, “I’m just getting started.”

The weapons you wield, the legends you forge, the Behemoths you can claim among your conquests – it’s all part of progression. We’ve used player feedback and tools that we’ve been developing to create new experiences that will redefine the time you spend in the Shattered Isles. Today, we’re pulling back the curtain on new progression systems inspired by your feedback!

No one envies the cartographers of Ramsgate the nearly impossible task of charting the courses and positions of the Shattered Isles. By the same token, the challenges that you’ll face as a Slayer will grow, evolve, and change over time. Dauntless’ new progression system is not merely an update to quest lines or crafting requirements, but a new platform on which we’ll build the stories of this world, your relationships with the characters that inhabit it, and the content we’ll be adding for years to come.

The new world map that you’ll use to select your hunts and see what’s available to your Slayer is a result of this commitment. We know that change is inevitable and we’re excited for what the future will bring. We can’t fit all of these dreams and designs onto one map, but this is where we as a community will come together to chart the course of Dauntless. 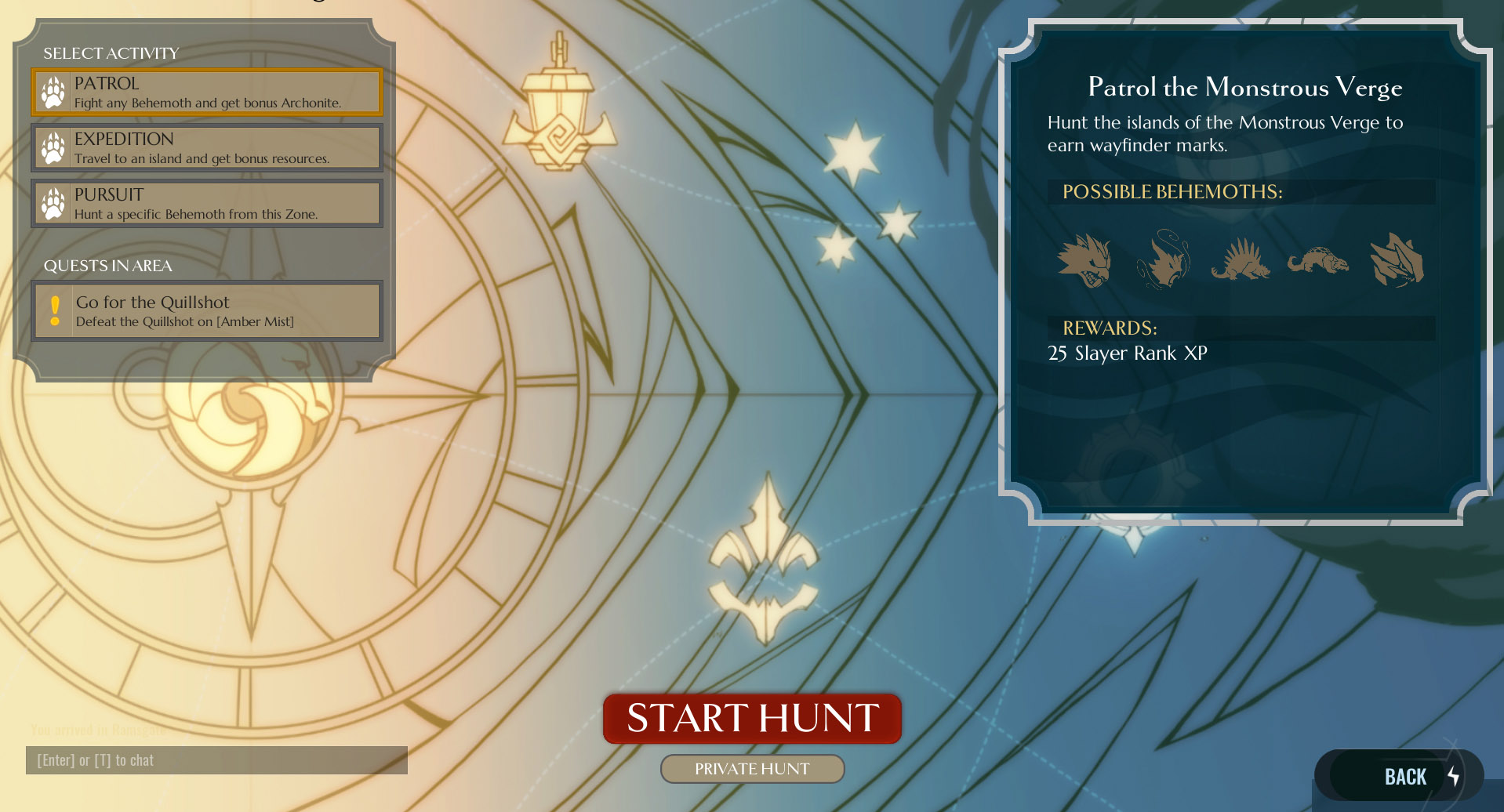 When a Slayer is faced with the overwhelming odds of an especially deadly challenge, they reach for the most valuable resource at their disposal. More than any new weapon, armour, lantern, or potion, a Slayer’s reputation is critical to their success. The path to making it home in one piece is too lonely without the trust of the leaders of Ramsgate and the resources that they command.

The Seeking the Horizon update, coming May 2nd, will introduce new reputation systems to progression. Slayers can look forward to winning the favor of three characters in this update and the launch of Open Beta, with more to come in the future.

In addition to unlocking options with these characters as you progress through the story of Dauntless, the Slayer, Alchemist, and Weaponmaster paths will each offer one weekly and two daily quests. Completing these requests as they come will net Slayers reputation and other rewards. Polishing them off every day will give players access to special cells, weapons, and consumables.

Captain Katerin Sorrel will be your guide in the ways of the Slayer, unlocking new challenges as you establish your name in the Shattered Isles. Wils Bormen, Ramsgate’s weaponsmith, will be more than happy to put special attention into weaponry and cells. And the Bosun, Markus Boehr, will give you the tools to unravel the mysteries of aether-infused alchemy in exchange for your aid. 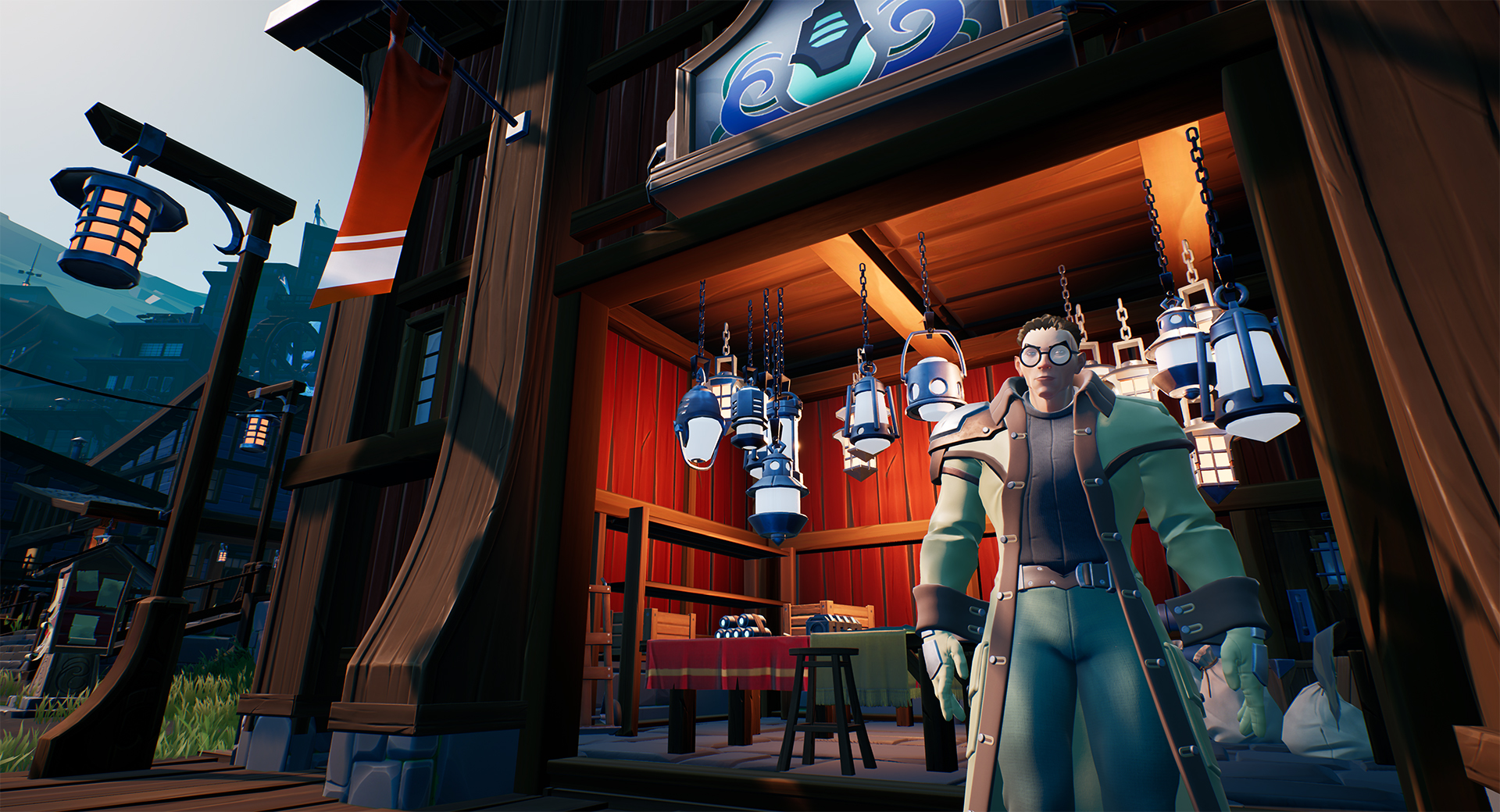 We’re also giving Slayers more choice when it comes to choosing their hunts.

Embarking on a “patrol” gives Slayers the option to pick the zone they’ll hunt in, but not the specific Behemoth or island. You’ll also receive bonus archonite for your contributions. The new “expedition” option allows Slayers to specify the island they’ll hunt on, but not the Behemoth – perfect for rounding up gatherables. You’ll also bring back an additional bundle of gatherables from the island you hunt on. Players looking to choose the Behemoth they’ll hunt can do so by embarking on a “pursuit”.

Regardless of where you set your sights, there’s always an adventure waiting for you just beyond the horizon. We’re excited to test these new systems with players with the Seeking the Horizon update on May 2nd and in the Open Beta on May 24th!

THE SPICE OF LIFE

We received extensive feedback from players regarding the diversity of gear, set perks, cells, and customization. We heard your feedback loud and clear and Seeking the Horizon is a total update for these systems. New armour set bonuses, new gear keywords, an overhauled cell system, and the ability to re-socket cells are all included. We’ll be diving into the details in another post, but for now know that these changes will massively expand possibilities and goals.

We’re also widening the diversity of quests that are available to Slayers. New side quests will offer unique rewards (like lanterns). We’re also working to add more reputation tracks for Slayers to explore in the future as the story of Dauntless evolves.

Islands will rotate in and out of the range of Ramsgate throughout the life of Dauntless. This means that the islands you explore and the activities that are available on them will change over time. We’re hard at work on two new islands, heavily influenced by player feedback, and you can look forward to discovering them in the Seeking the Horizon update. 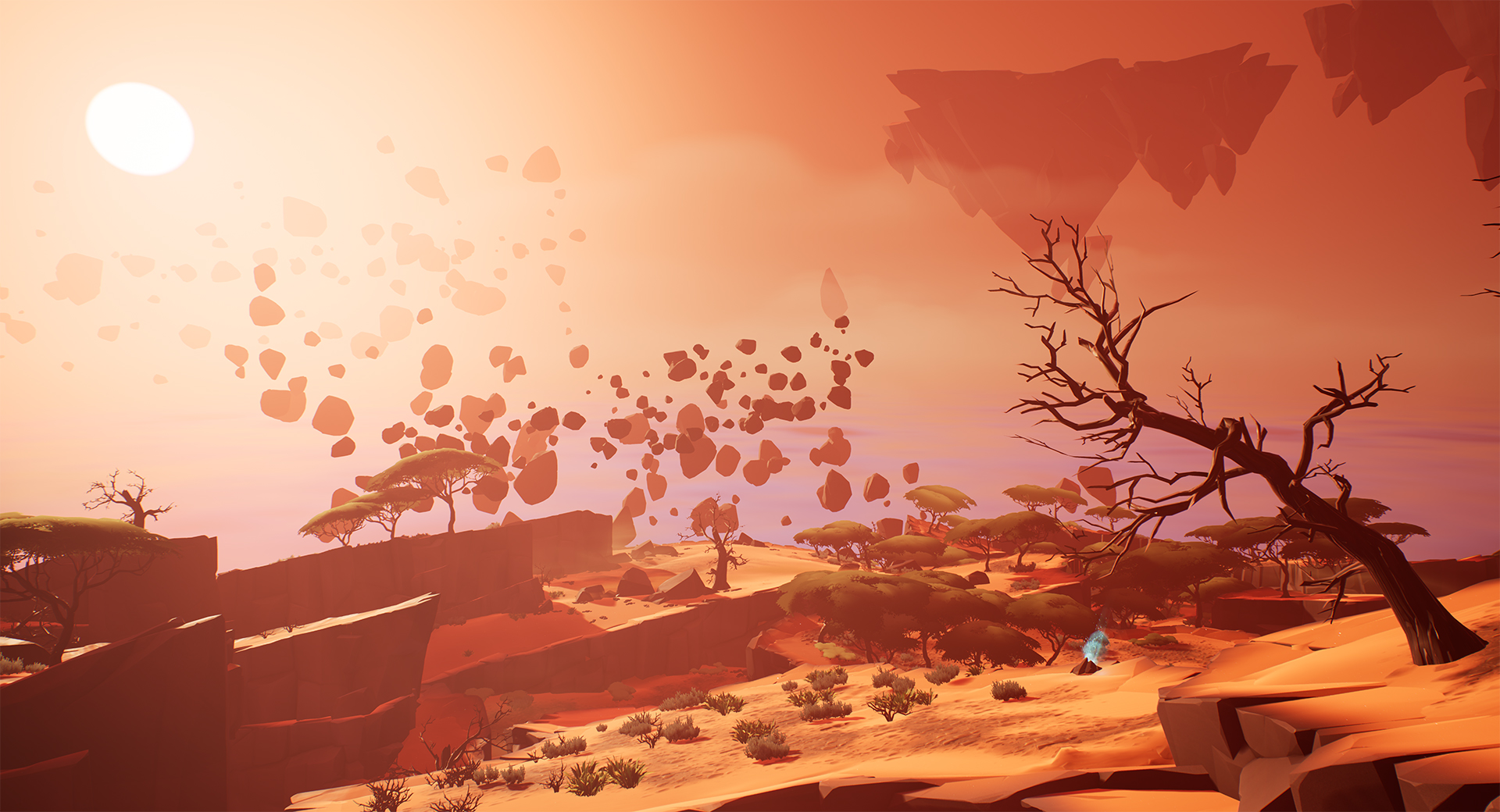 The Open Beta version of Dauntless will feature a story complete with character, intrigue, and your introduction to the Shattered Isles. Once you’ve completed the foundation of your legend and the “campaign” of Dauntless, it’s time to look toward the evergame.

Any Slayer that can’t adapt is as good as dead. Unpredictable storms and a maelstrom of Aether are constantly generating deadly variants and challenges that the guardians of Ramsgate will need to tackle. Unique hunt modifiers will come and go over time, challenging players to adapt their gear, builds, and tactics to match. And, if you’re looking for bone-breaking challenges – dive into heroic difficulty encounters.

To reward Slayers with the skills and grit to tackle these lethal challenges, we’re rolling out new exotic weapons and armour. This gear features unique, specialized abilities and distinctive looks to match. Make no mistake – this is armour and weaponry unlike anything you’ve seen, and is guaranteed to draw a crowd in Ramsgate!

Of course, choosing between a functional build and a kickass appearance is a drag. So, we’re implementing the transmog system to close the gap! Transmog Stones will allow players to map the attributes and skills of a piece of gear that they own onto the appearance of another piece of gear that they own. It’s the abilities you need to succeed with the style that will make you stand out. 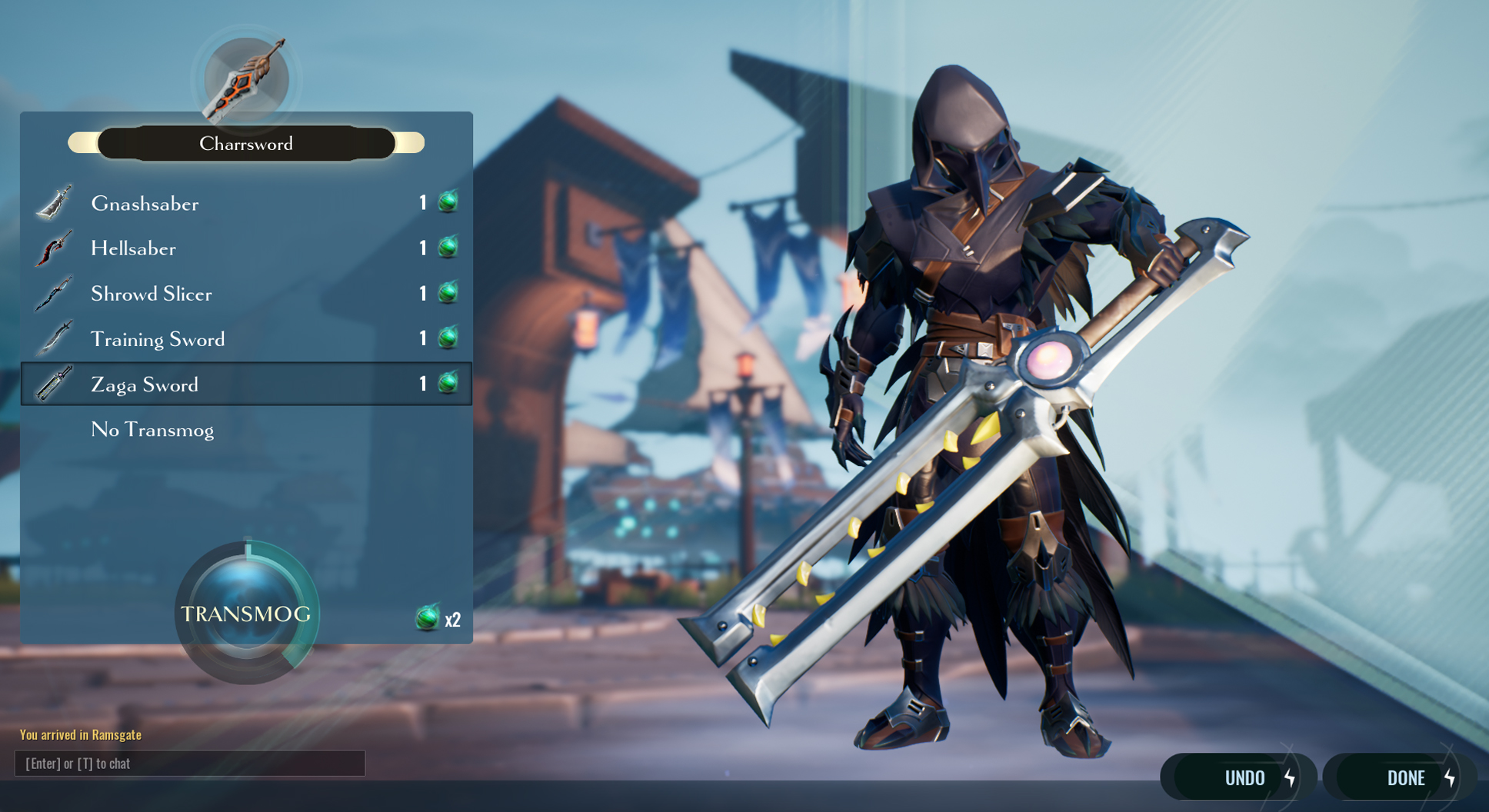 Huge changes are coming to Dauntless, made in large part based on your feedback. To accommodate these alterations, we’ll be doing a full reset of all player accounts on May 2nd. This signals your chance to get in, test out these new systems, and shape Dauntless as we move toward Open Beta.

Anyone who has participated in the Closed Beta before the 2nd will receive an exclusive in-game reward. This is our way of thanking our Closed Beta testers and giving you the opportunity to prove you were there.

After the May 2nd reset, we will move into a testing period leading up to the Open Beta. During this time, Slayers will have the opportunity to test the new content and systems that we’re adding, and they will be able to claim additional rewards. Based upon how far you progress through this final stage of the Closed Beta before the second reset on May 22nd, you will receive a different reward tier. We’re working to finalize these rewards and determine where the cutoffs for these tiers are. Stay tuned!

Now is the time if you’ve been waiting to secure your Founder’s Pack. Founder’s Packs will be replaced with Supporter’s Packs, and some of the Founder’s Pack rewards within will not be available in the future. From there, it’s just a matter of waiting for Dauntless to go fully free-to-play and open to all when the Open Beta launches on May 24th!

We’re excited to continue working with the Dauntless community for years to come. This update includes many major improvements that would not exist if not for the passion and dedication of players like you. We can’t wait to see what we’ll accomplish together in the future!