Acknowledge the power within yourself. Accept that you are not its master. Acknowledge that neither is it yours. Achieve harmony with this power. Amplify the convergence. All things are possible.

—The Six Tenets of the Adamant Temple

And don’t forget about the Seventh Tenet: Attack Behemoths and bash in their heads every chance you get. They don’t carve that one on the plaques but it’s more or less implied.

Many years ago, when a young Kat Sorrell was a very skilled Slayer but not yet a legend, she set sail on a voyage of discovery. Her goal: to study every fighting technique in the Shattered Isles and learn every possible way to slay Behemoths. Her search led her on many adventures but ended at the Adamant Temple, a hidden refuge on a fabled wandering isle. There she studied with fighting monks called Adamant Fists, warriors dedicated to perfecting the art of pure hand-to-hand aetheric combat. The Fists had learned to focus their inner strength to wield this power. In particular, it was said the Adamant Fists became living weapons—human hammers that channeled aether through their very souls into their deadly hands.

When she defeated enough of the Fists to be allowed to study with their Scarred Master, she learned their secret. The Adamant Fists used ancient gauntlets called aether strikers. These weapons were powered by pre-Upheaval secrets even the Master didn’t fully understand, drawing on the ambient aether into the human body. A trained Fist could use this to perform impossible feats of aether-shaping and martial fury.

So impressed was the Scarred Master by Sorrell that she granted her the right to take one of the Master’s own strikers with her to Ramsgate. Thinking she had learned all she could, Kat returned home but just one striker wasn’t able to take on a Behemoth. She gave the weapon to aethersmith Arkan Drew for study, hoping he could one day improve on it.

After the Skyquake, Kat had long wondered if the Adamant Temple survived. She asked every wayfinder captain who came through Ramsgate to seek them out and tell the Scarred Master, if she lived, that Ramsgate—and indeed the Shattered Isles—needed the Adamant Fists to join the fight.

To Kat’s surprise, her old teacher has finally answered her missives personally—for the Scarred Master has arrived in Ramsgate with a small team of followers and terrible news. The Temple had been destroyed. She and her followers are the last of the Fists. And they have followed the aetheric signature of the concentrated archonite within the Island of Trials to find Ramsgate, bringing a gift to the Slayers of the Shattered Isles: aether strikers. But these weapons were made to fight other humans, not Behemoths. Fortunately there was someone in the city who had been studying them for quite some time, and had a few ideas on the topic of amplifying their power: the aethersmith, Arkan Drew.

Thanks to Kat’s foresight, Arkan Drew was ready to help the Scarred Master transform Adamant aether strikers into weapons powerful enough to take on the Behemoths themselves. These Slayer’s aether strikers are what Kat dreamed of so long ago: weapons that could allow one to truly go toe-to-toe with a Behemoth, strength against terrible strength.

The Scarred Master and the last Adamant Fists will now call Ramsgate their home. She will train Slayers to use aether strikers and help forge them from the Behemoths that are their prey, and build as many of these sacred weapons as are needed. Indeed, strikers may just be the beginning, for the aethersmith and the Scarred Master found such success in their collaboration that they are eager to continue studying the interaction of ancient aether techniques with modern aetheric technology.

And so the Scarred Master of the Adamant Temple brought the mysterious power of her ancient order to the Slayers of Ramsgate, answering the call of her one-time student Kat Sorrell. The Scarred Master and her followers, the Adamant Fists, are the last of their kind, but with their help every Slayer will have another effective and energetic way to take down the most powerful Behemoths yet to emerge from the Maelstrom. And perhaps someday they will even defeat the terrors that brought down the Temple itself. 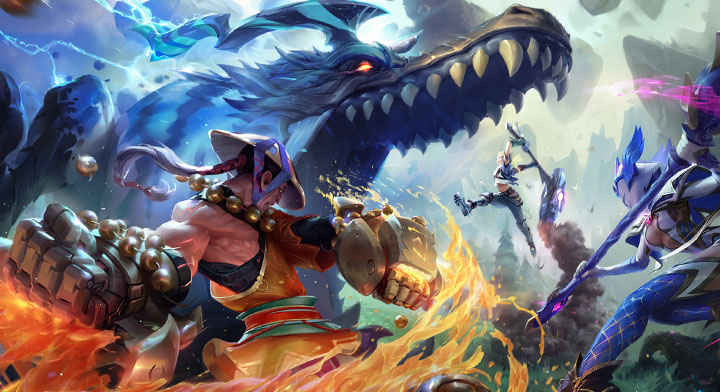